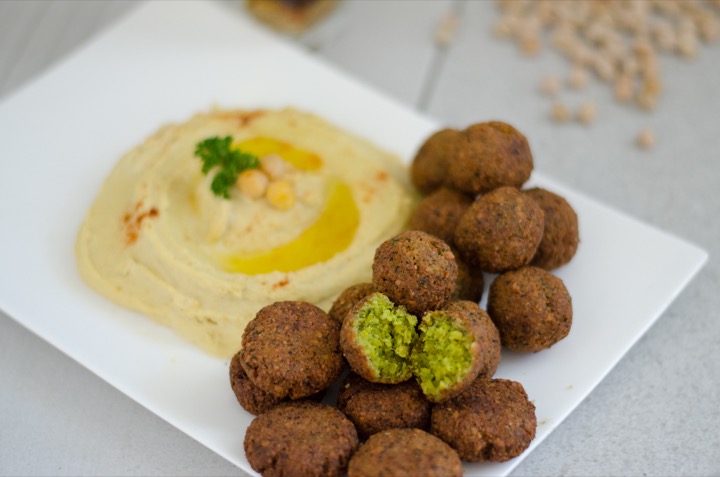 4.8 / 5
It’s so crunchy from outside and tender from inside! A perfect falafel recipe which is rich in protein and bold with flavors !
10M

Hey friends, you have reached one of my all time favorite recipes.

Falafel- A common middle eastern dish. The dish that goes through an identity crisis as every country claims that falafel was originated in their country and they make the tastiest falafel .
Falafel is a universal dish just like burger found in almost all the places . Since this is a universal dish liked and loved by all ,   Let me put my history cap and ask my readers a trivia question  “Where did Falafel originate?”
Any guesses  3… 2…. 1….the correct answer is  Egypt!!!

But falafel is a food that has become so widespread and popular, crossing multiple national and cultural boundaries, relished and equally enjoyed by everyone throughout the Middle East, embraced throughout the world. Though I have tasted the best falafel so far in Amman, Jordan, I actually want to visit Egypt and taste the falafel right from its origin!

But I became a fan of falafel after sampling different varieties throughout my travel in Jordan. They have falafel made from Fava beans, chickpeas , stuffed falafel and many more. We ended up eating falafel’s for breakfast!! Who would say no to it when it’s readily available.. Right?  So Yummy! ! I would never forget the flavorful falafel’s ever. I have almost tried to replicate the recipe below!

When falafel is made the traditional way, is indeed a vegan food, it’s a great source of protein for people who have cut meat out of their diet. It’s relatively low in fat and has no cholesterol if you fry it in heart-healthy oil. And if you top it with veggies in a pita, it becomes a filling and nourishing meal! 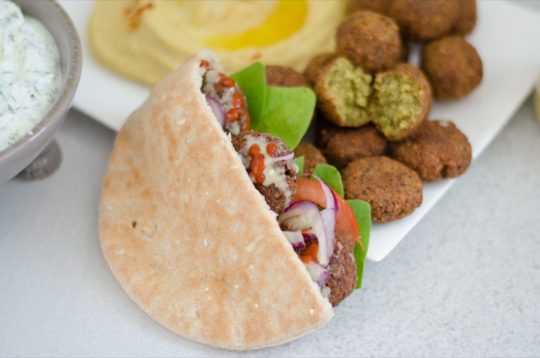 To start with , soak the dry chick peas for about 7 hours in room temperature. This is the simplest way. But if you want to make the falafel impromptu and don’t have 7 hours to spare then here is the solution. Quickly boil the chickpeas and set them aside covered to soak for an hour. The chickpeas should be tender enough to break apart with your fingers, but still have a crunch to them.

Tip: Never use canned chickpeas because  they are cooked and we do not want cooked chickpeas for falafel recipe.

I love adding lot of herbs to falafel, it gives nice color to it and also its very refreshing and flavorful. I have used lots of parsley, dill and cilantro as my green herbs – this trio of spices is what gives falafel it’s bold authentic taste. For spices I have added cumin powder and cayenne pepper. Some garlic, onion and lemon juice to enhance the palate with of course  most important ingredient chick peas! 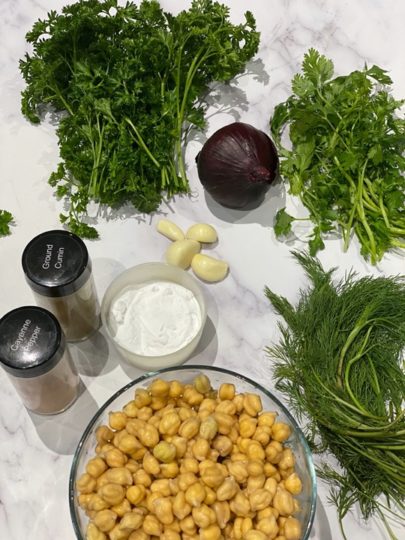 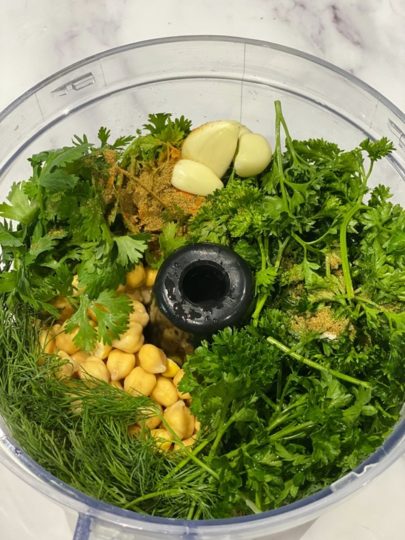 Put all the ingredients in food processor and process Falafel can be eaten as is or with Hummus , Tzatziki, Tahini. I like to stuff all these with some veggies in a pita and make a veggie loaded falafel pita pocket!

Falafel stuffed with veggies, hummus, tzatziki and tahini in a pita pocket

Get up go make them and let me know how it turned out for you! Leave a comment below and rate the recipe. I am waiting to hear back from you!!

It’s so crunchy from outside and tender from inside! A perfect falafel recipe which is rich in protein and bold with flavors !